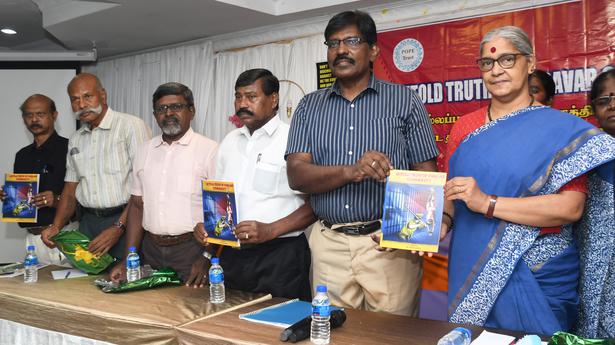 Pointing out to records that showed the majority of cases registered against members of Kuravar community had ended in acquittals, a Madurai-based NGO – People’s Organisation for People Education (POPE) – said cases were foisted against these members.

Out of the total of 549 cases, there were 262 acquittals and only 38 convictions. The trials in the remaining cases were still pending, the NGO said.

The general secretary of National Federation of Indian Women (NFIW) Annie Raja released a book titled ‘Untold truth of Kuravar community’ on Wednesday at an event organised by POPE. She urged the government to intervene and ensure that members of the Kuravar community were not subjected to such torture.

POPE conducted a study by interviewing survivors of violence across Tamil Nadu. A total of 30 samples were collected for the study. The members of the community were continuously targeted, false cases were filed against them and they were subjected to torture by the police. Men and women in the age group of 18-25 were targeted, the NGO said.

The study said that due to continuous torture and foisting of cases against them, many were labelled as criminals and antisocials. This label had a long-lasting negative impact on them and they suffered from social stigma. The members of the Kuravar community were avoided by the members of other communities.

In its recommendations, POPE urged the State government to take steps to ensure that such illegal detention, police torture and caste atrocities are not committed. It sought judicial inquiry into cases of custodial torture, compensation, rehabilitation to victims and effective implementation of the Scheduled Castes and Scheduled Tribes (Prevention of Atrocities) Act.