With no warrants, TN police barge into homes of Kuravar men, take them into custody

Two of the men were allegedly tortured in custody, and the police have been accused of demanding ‘gold and silver’ from them to pass off as loot recovered from the men in an allegedly false theft case. 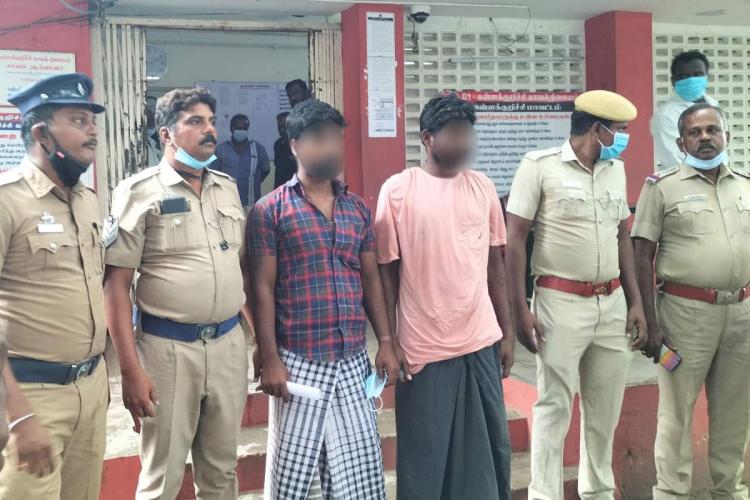 The police in Kallakurichi district in Tamil Nadu have been accused of barging into the homes of five men belonging to the tribal Kuravar community and taking them into custody, allegedly by foisting false cases against them. The wife of one of the men has written to the police alleging that since the men were picked up on November 14, she has not been able to contact them, and has alleged that her husband is being tortured in custody to confess to the purported charges.

According to a complaint filed by 23-year-old Bhuvaneswari, her 23-year-old husband Prakash, and two of their relatives – 55-year-old Selvam and 35-year-old Dharmaraj – were forcefully arrested by the police at 11.45 pm on Sunday. In her letter to the police, she has demanded to see them, and alleged that around 10 policemen from the Chinna Salem station barged into their home in Thillai Nagar, hurled casteist abuses at the three men and then forcefully took them away. There was no arrest warrant or a memo shown to the family to justify the arrests, Bhuvaneshwari has said. While these three men were arrested on November 14, two more men from the same community – Paramasivan and Sakthivel – were arrested two days later, on Tuesday, November 16. While Selvam and Paramasivam have been released later on Tuesday by the police, the other three are still in police custody.

According to reports, the five men were arrested on charges of robbery, as the police claimed that their fingerprints matched those left behind at a crime scene where an incident of theft was reported. However, Bhuvaneswari, as well as activists based in the area, have alleged these charges against her husband and their relatives are false, and have demanded that they be released.

In her letter to the police, Bhuvaeswari has alleged that on November 14, around 11.45 pm, a special team consisting of 10 policemen reached their home in a white tempo. At that time, her husband Prakash and their children as well as their relatives Dharmaraj and Selvam were sleeping at their home. “They asked my husband and two of our relatives to come to the police station for an investigation. They verbally abused my husband, and referred to our caste name with slurs when we asked them for the reason behind the investigation,” the complaint by Bhuvaneswari adds.

The wife of Dharmaraj, one of the men who are still in custody, alleged that she spoke to her husband who said he was tortured in custody. Dharmaraj also allegedly told his wife that the police asked them to bring “gold or silver” so that they can justify the case filed against the men by presenting the men’s families’ gold or silver as recovered loot. Dharmaraj’s wife has alleged that he had to agree to give the police something just to make the torture stop.

“They’re asking for the gold and silver, so then they can put a case. We don’t have any. I asked my husband why he told the police I can give them [gold or silver]? He said he couldn’t bear the pain. He’s saying they hung them upside down and beat them,” Dharmaraj’s wife told TNM. “We are able to eat only if we work that day, where will I go for gold or silver? If I had any, I’d give it just to get my husband released.”

Dharmaraj’s wife has alleged that this is not the first time that her husband has been picked up by the police without a substantive reason. “They catch us just because we’re Kuravar. This is the second time this is happening to my husband. When we were on the way home after our first child was born, the police blocked our auto and took him away even then.”

Witness for Justice, a social organisation in Madurai working against caste atrocities, has also written to the police demanding to know why the due course of law was violated by the police. “The police forcefully entered their homes and have taken away these three persons without issuing a custody memo, search warrant, and arrest memo. The family members have not provided any details of these three persons on their detention by the police so far. Now, the whereabouts of three persons are not known,” Witness of Justice has said in its letter to the police. Sudha, an activist working with Witness for Justice, told TNM that they were informed of the arrests only on Tuesday night.

“On Wednesday (November 17) morning, we learnt that 13 cases have been filed against Prakash. They say it is a theft complaint but it is not clear,” Sudha tells TNM. She also corroborated the Dharmaraj’s wife’s version, that the police demanded that she “gives them something” for the “torture to stop”. “This morning, the police entered his (Prakash’s) home and threatened his wife (Bhuvaneswari) that her husband had given her something and demanded that she hand it over to the officials. They called him on the phone and gave the phone to her. He told her, “Just give them whatever you have, I can’t bear their beatings anymore.” She told him, “You get beaten up and die there, and we will die here. What is there for us to give?” She told police that they don’t have anything and he is clearly speaking out of fear,” Sudha told TNM.

Sudha, as well as the family of the men arrested, went to Kallakurichi court on Wednesday, where the three men were produced before a magistrate, almost three days after their arrest.

TNM reached out to the Kallakurichi Superintendent of Police, Ziaul Haque, to verify details and for a response to the family’s allegations. The SP told TNM that he is presently on leave. “I received a few queries and checked with officials. As per the latest information I have received, the men have been presented in court for remand today (Wednesday),” he said. When asked why the men were not produced within 24 hours of their arrest, as per the law, the police official said, “I am not aware of the family’s version of events.”

Prakash’s wife Bhuvaneswari has written to the Superintendent of Police, Deputy Superintendent of Police and Inspector of Police in Chinna Salem of Kallakurichi district demanding that their relatives be released from illegal detention. Witness for Justice has also written to the police, demanding the family of the men who are in custody should be allowed to meet those who have been detained, and that they must know the grounds of arrest. The organisation has also asked that the Supreme Court guidelines on arrests of persons, as issued in the DK Basu judgment of 1996, be followed.

The DK Basu judgment gave guidelines on arrests and protection of prisoners’ rights. According to the guidelines, an arrested person has the right to have one friend/relative/other person known to them being informed of the arrest and the location where they have been detained. The guidelines also say that the police officer carrying out the arrest should prepare a memo of arrest at the time of arrest and such memo should be attested by at least one witness.