The People’s Organisation for People Education is organising art workshops for kurava children to give them control over their own narratives.

“The power of art will help any individual discover themselves. It will give them direction and will show them a different world view” – This is how advocate I Pandiyan, Executive Director of People’s Organisation for People Education (POPE), a Madurai-based NGO that works towards equality and access to the judiciary for all, explains the idea behind a recent initiative that is being executed under their Witness for Justice programme. 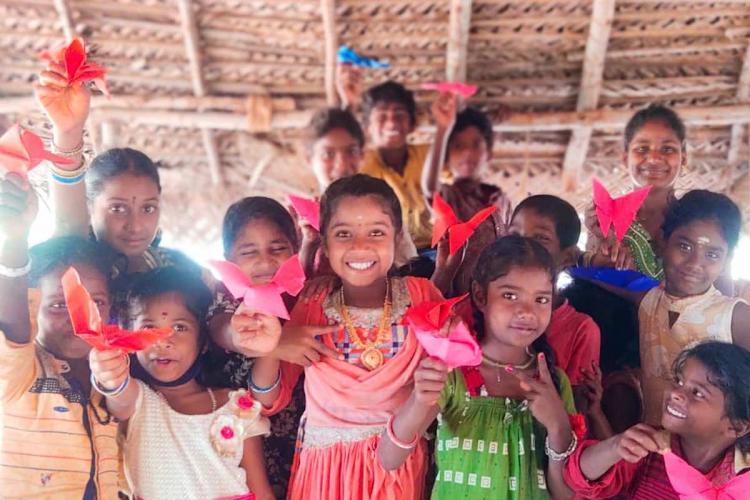 Witness for Justice is a programme that focuses on police violence and caste atrocities. Under the same, POPE is taking art to children, who use it as a means to counter prejudices against the communities they come from. As a first step, POPE has been working with children belonging to historically-oppressed communities, especially the kuravas, in Manojpatti, Munnaiyampatti, Vallam, Sengipatti, and Thirumanur villages in Thanjavur district. The workshops employ painting, crafting, photography, storytelling with words and visuals, folk art and more.

Pandian explains that kuravas are among victims of the Tamil Nadu Restriction of Habitual Offenders Act. Under the Act, a person identified as a habitual offender will be put under stringent watch by the police and can even be arrested without warrant by a police officer if found to be outside his/her designed area. The stigmatisation of certain tribes – such as the kuravas – as criminals is rooted in the British rule in India. While the Criminal Tribes Laws (Repeal) Act of 1952 intended to change this, the Tamil Nadu Restriction of Habitual Offenders Act continues to propagate the stigma even to this day by identifying certain communities as habitual offenders.

A two-day workshop was conducted at all five Thanjavur villages for children between eight and 18 years of age earlier this month, with plans of making it a monthly affair. “We were able to see a very positive response. In one village, children from another Dalit sub-caste, who had not entered the Kurava colony until then, came in to play. Their parents too took interest in the art workshop and sent the children over. In another village, where there’s a mixed population of kuravas and Muslims, we were able to see great camaraderie between children,” Pandian shares. “Our main idea is to make art a collaborative effort. They can easily break all boundaries and connect with each other.”

POPE is involved in fact-finding, legal research and litigation filing process around Thanjavur and Madurai districts in the state. Through their Witness for Justice programme they are able to work via an alternative pedagogy towards changing narratives. As part of it, Children Resource Centres too have been set up in a few villages, Pandian tells TNM.

With the intent of wanting to change the distorted narratives foisted about them by society, Pandian, along with a group of facilitators, came up with the “remove your mask” experience for the children. As part of it, masks were cast using plaster of Paris and then children were made to remove them, as a metaphor. “When you look at your face, what do you see?” Pandian asks. “There’s beauty, love… And so, we explain to the children that their face is not a criminal identity. Only when they are able to see themselves clearly will they be able to make the world see them so.”

Pandian has a few more ideas too. “We plan to organise an exhibition in the village to bring sensitivity about the programme. Parents too will be able to see their own children in a new light, when they see the kind of work their children have created.” 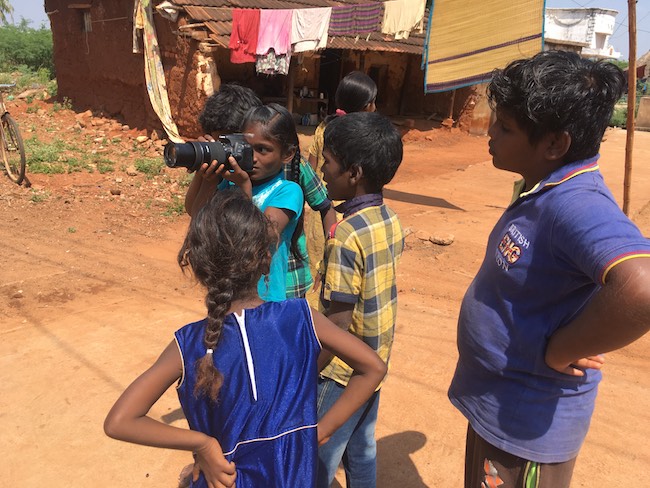 He adds that when teachers, members holding government posts and police officials are invited to such exhibits, they too will be able to ‘shed their masks’. “We have been doing child rights workshops, child advocacy programmes, etc but we believe this art pedagogy will be far more effective than all of that put together. Everyone will be able to see the children in a new light. They will become stars in their classrooms, with their newly acquired talents in art, photography, video-making skills, etc. We would have created a space for social dialogue,” Pandian asserts.

“This is children doing advocacy on behalf of their community,” he adds with conviction. “Right now, the society may say ‘don’t enter the street’. But when the child grows up and sees himself/herself as an artist or a writer, who can stop him/her from creating art? That’s why art is a powerful platform.”

Pandian also points out that there are gaps in school curricula which perpetuate these social issues. “Our curriculum here is the problem. We’ve been studying physics, science, maths in schools but nothing has changed. [Prejudices related to] caste, gender, culture, and religion persist. The reason is children are blindly made to study and a value system is not created for them.”

Through this initiative, Pandian believes that children can tell their stories in their own words, and that has the potential to create change. “I can very well write a letter of complaint to the Director General of Police explaining that a person from the kuruva community has been wrongly accused of a crime. But imagine a handwritten note by the victim’s child, along with a book of photographs and artworks done by children from the community. When they read the words, “We are the children of the victims of police violence,” won’t that shake their conscience?” he asks.

“After all,” he continues, “they are citizens of this country and are going to build this nation.”